We don’t need politicians and liberal activists controlling our wallets.

We have the right to make our own financial decisions!

We want financial flexibility and choice, not government intervention or management of our money.

Many Texans are one blown tire, one sudden illness, or one unexpected crisis away from a personal financial emergency. Access to short-term credit is a much smarter choice for many – and cheaper – than bank overdrafts, utility shut off fees, or late payment fees or worse – loss of a job. Short-term credit is a flexible financial option to help prevent a bigger money problem.

Many politicians are out of touch with the financial reality of most Texans.

Elitist politicians and liberal activist groups are completely out of touch with the financial reality of average Texans.

Health care and prescription drug costs are skyrocketing, food prices are high, and wages are stagnant. These factors make it difficult, if not impossible, to save for a rainy day. Evidence suggests that many Texans, regardless of income, are in similar situations. A federal government shutdown of less than 30 days threw many workers into a financial tailspin.

Some politicians and liberal activists think we are too stupid to make our own financial decisions.

We don’t need liberal activists who’ve never needed a loan, with their hands in our pockets making our financial decisions for us

This is completely contradictory to our independent Texas spirit and is reminiscent of central planning in socialist governments. For a variety of reasons, many of us don’t have a three-month cash cushion. But that doesn’t mean we’re stupid. We understand the differences between short-term loans and the costs of overdrafts, utility shut off fees, late fees, etc.

Polling of short-term credit customers completed by Harris Interactive showed that 93 percent of short-term borrowers carefully weighed the risks and benefits before taking out a short-term loan.

This is a manufactured crisis brought on by liberal activists and the mainstream media.

The liberal activist playbook is to parade around the very few disgruntled consumers to the left leaning media to manufacture a crisis while ignoring all statistical data that suggests a different story.

These people are outliers. For every disgruntled customer, there are hundreds that value short-term credit services.

Every industry has disgruntled customers, but based on complaint data published by the Consumer Financial Protection Bureau (CFPB) and the Texas Consumer Credit Commissioner’s Office (OCCC), the short-term lending industry has the lowest rates of complaints per transaction of all the different financial services – banks, credit unions, mortgage companies, credit cards, etc.

Eliminating access to credit only hurts, not helps, the very consumers they claim they are protecting.

According to the Federal Reserve Bank of New York, when Georgia and North Carolina banned short-term loans, households bounced more checks, complained more to the Federal Trade Commission about lenders and debt collectors, and filed for Chapter 7 bankruptcy protection at a much higher rate than those states without restrictions.

Online loans are more expensive than storefront loans. It is often hard to tell whether you’re dealing with a licensed, reputable, on-line lender or an unregulated off-shore lender from Eastern Europe, Russia, or China. The prospects of our friends and neighbors being forced to deal with the dangerous collection practices of illegal lenders is sobering.

East Coast elitists and many liberal Austin politicians prefer the government, not the private sector, to provide taxpayer-backed short-term loans.

It is irresponsible public policy to eliminate more than 2.2 billion dollars in access to credit for millions of Texans without a reasonable alternative. Community and charitable lending programs, while encouraging ideas, can’t come close to meeting consumer demand in Texas. The community loan center program concentrated in South and East Texas has struggled to loan $38 million in five years.

The Center for Responsible Lending describes itself as a “non-profit, non-partisan research and policy organization” working to eliminate predatory lending practices. However, the CRL is a liberal advocacy arm of the Self-Help Credit Union – a $500 million financial institution with credit unions throughout the United States.

Individuals from the CRL have passed through a revolving door between Self-Help Credit Union Network and federal positions at the CFPB during the Obama administration.

Credit unions stand to gain the most through higher overdraft fees and exclusive rights to offer taxpayer subsidized loans with limited competition. These policies will further boost their profit margins.

The states with the most restrictive short-term lending laws have been the highest area of growth for the Self-Help Credit Union Network.

Contrary to the lies told by these liberal activist groups, Credit Access Businesses and short-term credit providers generally make about one percent of revenues when you factor in default rates. Financial institutions such as Wells Fargo, Citibank, and American Express maker almost 15-20 times more profit than Credit Access Businesses. 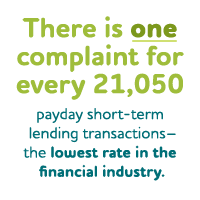 9: Data provided by the Texas Office of Consumer Credit Commissioner